HUMAN GOVERNMENT AND THE FINAL OPPRESSION 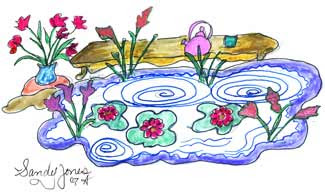 Sketch - Lily Pond - Sandy Jones
Excerpt from  "The Child Within Us Lives! A Synthesis of Science, Religion and Metaphysics"
by William Samuel.
Available on Amazon -
HUMAN GOVERNMENT
Totalitarian governments, right or left, disparage God. Why? Because their control over church people is not complete. Exactly so, churchdom in the world unwittingly disparages the subjective idea because the people who truly find subjectivism cannot be controlled very well either. The subjectivist is as weird to the common man as the quantum physicist is to the ordinary scientist. Yet, subjectivism discovered and lived will eventually be as catalytic in the human experience and all of its institutions, and do as much for them, as the subjectivism of quantum has done (and will do) for the sciences.
Unchallenged religion, like unchallenged government, has led to racism, concentration camps and sycophantic, half-sleeping followers pushed into one holy war after another. Now, another Holy War looms, perhaps the last. Only the Child within us escapes the final oppression of exclusive externalism. "I alone am escaped to tell thee" are the words the suffering Job heard. (We might note that the marvel of the American system is the citizen's right to challenge external authority when it seems wrong to him-and this right is guaranteed to him in writing by his government!)
Church government, which generally considers itself superior to human government, would do well to let its lowly members challenge a few of their leaders and some of the church's ancient creeds and dogmas that have been clearly outgrown. The humanly ungovernable Child within us will be up and out one day very soon as linear time goes, and, when it is, every organization will be reorganized.
I doubt if words that tell of the Child within us could be published in the Soviet Union where external authority is supreme. I know these words I write could not be published by the individual in the Roman Catholic Church or the Christian Science Church without that individual being taken to task. But the Child within us is already free of human government, living and moving and having Its being in our heart of hearts!
Now, the knowledge of the Child doesn't mean that we-as the rediscovered Child-don't vote or support our church and country. We don't withdraw from anything. It means more nearly that we are viewed as a peculiar people, not quite so governable by external authorities and their institutions. We will be taken to task by everyone who hears and fears our Self-discovery. The prophets saw this coming-as did Jesus. "Blessed are you when men shall revile you and persecute you and say all manner of evil against you falsely" (for the Child's sake).
The point being made here? That church governments anywhere in the world, including the United States, are just as dictatorial and demeaning, when they feel threatened, as any secular government has ever been. The recognition of the Child within us is coming soon to challenge all exclusively objective modes of mind. The egocentric turf protectors, the priests, rabbis and ministers clutching their numbers, will bellow and shout and bring their houses down on their heads because the people they lead like sheep will perceive that the Child is indeed alive within themselves as it is in us. And exactly as the prophets said, "... great will be (the Child's) reward in heaven, for so persecuted they the prophets before you."
Bottom line: It is natural for the objective world to try to hold to the status quo and to subdue the subjective idea if it can. Subjectivism has been put down successfully by churchdom many times before. It was a subjective uprising within Judaism that gave birth to Christianity. But what do the rabbis teach about the subjective idea today? That it is dangerous! Judaism warns the rabbis who would like to explore the deep things of God that subjectivism can safely be studied only with a proven prophet. And what do the organized Christian sects teach of subjectivism? See for yourself. Virtually nothing.
Now that the physical sciences are in the process of rediscovering metaphysics once more, in quantum mechanics, it remains to be seen what they will do with it; but if the past forty years are an indication, there seems little reason to doubt the prophets' predictions. Perhaps it is poetic justice that it may very well be the concretized egotism of mankind, led by its organizational leaders-ministers, rabbis, mullahs and priests who know nothing of subjectivism whatever-who, with their frightened, uneducated flocks, will appear to do the "devil's" final work of tearing down the houses whose foundations lie on objective sand.
Quantum information is arriving now. The world is being flooded with information that is certain to induce new modes of thought, if mankind is to survive the upheaval. The old things will certainly pass away. There will be a new heaven and earth to be seen with the eyes because it is here already, unseen.
The Child within us survives. Those of us who have found that Child will be non-judgmental onlookers, doing what we have been given to do to help our new world. And we will do it against great odds-successfully.

About William Samuel
Literary Executor Sandy Jones
Barefoot at Heart-The Alchemy of Love and the Power of Light   by Sandy Jones
www.williamsamuel.com

Posted by Sandy Jones Woodsong Journal Notes at 8:31 AM

Sandy Jones Woodsong Journal Notes
I am the Literary Executor to William Samuel, well known author and teacher of metaphysics and spirituality. As owner of all copyrights to his works, I keep his books and material in publication as the demand for his brilliant work, based on Awareness and Self-discovery, continues to grow. William Samuel passed away in 1996, but the Light of Truth in his words remains ageless, simple, clear. The premise of his teaching is that there exists a gentle, direct experience of the Presence, Awareness. Self-Knowing Truth--and it is available to each of us. You may read the many excerpts from his legacy of work that we post here. Through William's gift of communication, you will be shown the way back to your Self, your own heart, insights and revelations. Mr. Samuel imparts in everyday words the same wisdom of the great enlighten ones. Read the biography of William Samuel at his website www.williamsamuel.com -- I am very happy to be able to share his joyful, liberating message with you. William Samuel's books are all available on Amazon Enjoy the art work and writing by me, Sandy Jones at www.woodsongjournals.com www.celestialsong.com www.williamsamuel.com